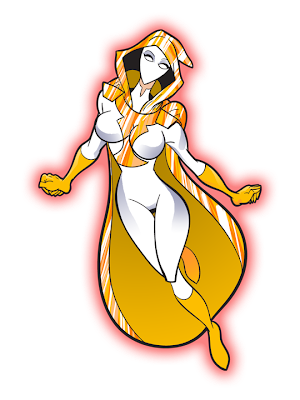 The first piece of the Field Guide has gotten us all great reviews both from RPGNow and from Steve Kenson, the creator of ICONS, who you can hear on the latest Vigilance Press podcast. Now that I am back in town, I am working furiously on the final edits for Volume 2, which will add ten more archetypes and complete the first half of the project.
Art is starting to come in from my collaborator, Dan Houser, and as you can see it's some great stuff. The art for the Field Guide is already a great fit, because Dan has defined the house style for ICONS, but now it's going to be, quite frankly, better than anything in ICONS.
For those watching at home, volume 2 will detail:
Posted by Jason Tondro at 10:30 AM No comments:

"Comics & the Graphic Novel in America and Britain" 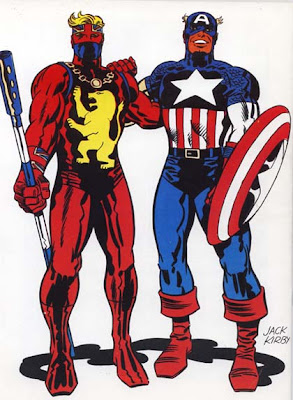 So a couple days ago I got a call from Deborah Willis, who is Department Chair in English at UCR now but who I will always remember as the woman who taught me Marlowe, and she asked if I would like to teach a class on, well, pretty much anything I wanted. Ordinarily I am kind of a dope when offered awesome things, but this time I had the sense to say yes. The course number we are using is supposed to be 20th century American and British lit, and she suggested something on graphic novels, so I put those two ideas together and decided to do half the class on American creators and the other half on British creators. UCR has 10 week quarters, so our reading list is painfully short. It was easy to come up with the British half: Moore, Gaiman, Morrison and Ennis gave me a great cross-section and every one of them are amazingly talented, active, and accessible.
The second half of the roster was harder to figure. I really wanted to use some old school comics creators, maybe get some Lee & Kirby on there, but it's hard to imagine what sort of self-contained narrative I could use. Silver Surfer maybe? I don't know. Sounds like kind of a reach. So I went back to the big picture and thought, well, who do I have to include? So Eisner went on the list, and I went with Frank Miller because, even if he basically only tells one kind of story, that's become a pretty quintessentially American story in whatever form it takes and for sheer influence on the superhero medium he's huge. Appalled at my lack of female creators on the reading list, I decided to take the chance to read some Gail Simone, whom I have long admired and wanted to showcase. Finally, I picked Jaime Hernandez, because it has been forever since I got to teach Death of Speedy and I just love that god-damn book.
So here's the final reading list. No doubt imperfect, but I'm going to go with it and try to learn from the inevitable failures.
There's a thousand other books I could use if I wanted, but you know, "world enough and time." All I can do is assign a term paper which sends the students to works beyond this list, show them the Eaton Collection of comics here at UCR, and let them write on whatever they want to read.
I should have 50 students. That's going to be a lot of papers. But it'll be a fun class and I'm very excited. No doubt I will learn much.
Posted by Jason Tondro at 11:34 AM 2 comments:

I first discovered Usagi Yojimbo as an undergrad, and I have to admit that when I first read it I considered it something of a guilty pleasure. I mean, this is a comic about a rabbit. It felt ... so childish to be reading a comic about a rabbit. Except, of course, that the comic is "about a rabbit" to the same degree that Maus is "about mice." Which is to say: not at all.
By now, everyone who reads comics should know about Sakai and his wonderful story of a wandering samurai who just happens to be a rabbit. The story is wonderful, and Sakai has a way of teaching us about Feudal Japan in a way that never feels heavy handed or boring. The art is so delightfully smooth, simple, and expressive, how can we not be touched by it?
No one but Stan Sakai could draw those panels. Usagi is bouncing on top of a giant drum, by the way.
The Beat is plugging Usagi today as part of their "30 days of previews" feature. You should check them out. But more importantly, check out Usagi Yojimbo. It's a treasure in 24 volumes (and counting!)
Posted by Jason Tondro at 3:41 PM 1 comment: