The story of a team’s breakup in the wake of the death of its mother figure has been told many times in many books, which is normally a reason to think this time will be otherwise. But the comic industry’s ability to pile pain, torture and death onto its female characters in the name of shock, pathos and tragedy is beyond measure.
Chance of Death: 4/4
If I were a gambling man, the money would be on Sue. But if I were living in the 21st century and I were instead an investment banker, I would securitize Ben just to cover my potential losses. Then, when Johnny Storm gets turned into the Human Doormat by Dr. Doom, I would get a Marvel bailout.
Posted by Jason Tondro at 1:44 PM 2 comments:

Adrienne Roy was the best colorist DC Comics ever had. She colored Batman and Detective Comics for something like 15-years each, accumulating 600 issues of the Bat-family in all. Her name appeared in more Bat-comics than anyone except Bob Kane. She also colored a little title called New Teen Titans, which in the humble opinion of this author was the best DC book of a generation. She was the first colorist to be signed to an exclusive contract for DC. She was the only freelancer to have her own desk at the Manhattan offices. She was one of the first female fans to break into the business. And, just to put icing on the cake, she was the centerfold for the premier issue of Tattoo magazine.

Adrienne Roy died last week after a year long fight with ovarian cancer. She was only 57.

A favorite of the convention circuit, beloved by those editors, writers and other artists who worked with her, not to mention her family, the list of memories invoked by those who knew her is both illuminating and touching.

You should read them, and all about Adrienne while you are at it.
Posted by Jason Tondro at 11:13 AM No comments:

Death by a Thousand Cuts 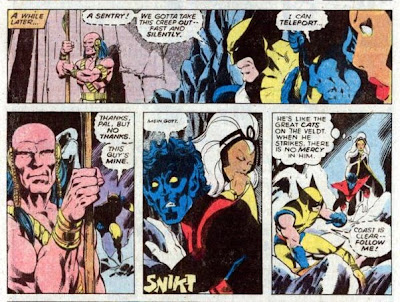 Lots of exciting things going on here, but I thought I would start with a hello to anyone who might be visiting from the Vigilance Press Podcast, sponsored by nobleknight.com. I had the pleasure of participating in this last evening with Mike Lafferty, Charles Rice, and Daniel Gallant, and after we talked about the Field Guide and Daniel's new ICONS character portfolio, we had a great time playing a little ICONS. I used the Bruin, who is from the second volume of the Field Guide, Mike made "The Whiz," a speedster trained by Tibetan monks in the paralyzing cobra strike, and Chuck had "Spartan," our resident Mutant Master of the Mind. Mr. Gallant (whom I envy on the basis of "If he got superhuman powers, his name would be his codename") was our GM. If you have not listened to it, you should give it a turn right here.


Before we got into playing, Chuck and I got into a bit of a discussion on superheroes and killing. It's an old debate, and a good one, and Mike was good to rein us in as we could have gone on for hours. Chuck's basic position, and it's a very understandable and common one, especially among players of superhero games, is that superheroes who swear they don't kill are being pretty naive and weak. When a criminal psychopath like the Joker has demonstrated his ability to escape from confinement time and time again, each time murdering dozens before being recaptured, only for Batman to defeat and not kill him, Batman must share some culpability for the Joker's crimes. The superhero who swears off killing is not only weak and ineffective, he's kind of a dope.

On my side, I tried to argue that while this argument makes a lot of sense on a visceral, "He killed so I can kill him" level, superheroes like Batman, Captain America, and the X-Men (all of whom are generally portrayed as No-Kill-Heroes, despite many notable exceptions to this rule) use their no-kill philosophy to teach us something: Just because someone else is evil, does not justify your own descent into evil to defeat them. Captain America has given this speech a hundred times if he has given it once. To execute an evil man is to lower yourself to his level. The superhero is a self-appointed agent of criminal apprehension, not a judge or jury. If a criminal is to be executed, that will be determined by a jury of his peers, not one man, no matter how justified that execution might appear. This is not weakness, it is a recognition of the essential character of the American criminal justice system. It's not Batman's fault that the Joker kills people. Batman does his part. That doesn't mean he doesn't feel guilty when the Joker kills. Of course he does. When the Joker killed Robin with a lead pipe, Batman wanted to kill him. But that would also be murder. Because Batman is not empowered by the American people to hand out sentences of execution. That right is reserved, not for Batman, Captain America, or the X-Men, but to you and me. We are the ones who decide if people live or die. And letting Batman do it for us is taking the cheap way out.

But in many ways, what is more interesting here is the long debate over superheroes and killing, which has been portrayed in many wonderfully thought-provoking books over the years. Chuck mentioned a panel from X-Men, and it is a famous one, so I thought I would represent it here and you saw it at the top of the page. Wolverine murders a guard in the Savage Land while Storm and Nightcrawler look on, the former saddened and the latter horrified. Claremont and Byrne are demonstrating their genius here, because it takes a thoughtful creative team to move the camera off of the murder and onto the reaction shot. Jim Lee would have kept the camera on Logan as he stuck his claws through this guy's back. Yawn. You see one merciless killing, you have seen them all. But the reaction shot illustrates the real drama of the scene. It's not the killing, it's the moral and ethical questions the killing raises. That's what makes this story so damn good.

Lethality in comics has gone on big pendulum swings through the decades. In the Golden Age, no one batted an eye when the bad guy got killed. By the 1960s, however -- and I am tempted to say this was largely the result of the Comics Code, but I may just be taking the easy way out -- Superman had become the Blue Boy Scout and even Batman was having his goofy period. When Wolverine killed in the pages of the X-Men it created tension and a moral quandary which built for a while, peaked, and finally collapsed by the 1990s. Later writers tried to portray this split in comics; the Avengers ended up splitting into two teams when one half (led by Black Knight) decided to kill the Kree Supreme Intelligence and the other half (led by Captain America) refused to. But really this was all just the pitiful thrashings of a crippled giant. Marvel was deep into its darkest days by this period, and it seemed as if every hero and team was now carrying guns and wearing armor. Don't tell me you have forgotten Fantastic Force. When a superhero team founded on principles of exploration, imagination, and adventure has been turned into a Rob Liefeld book, you know you have gone far off the reservation.

The reason that cover looks so crappy, by the way? Foil. Nuff said.

These days, even Captain America kills. It is, after all, war. And no one should mistake me for some kind of super-pacifist who wants to trash any superhero who kills. That's not my point at all. Rather, I am mostly interested in a good story. And tension -- between those heroes who kill, and those who do not -- makes great story. In order for that tension to work, both heroes have to have some kind of authority. They have to be successful at what they do. If only one of those two approaches works, then obviously it is the only correct one and the tension evaporates. We need more panels with Storm and Nightcrawler cringing as Wolverine murders a guard. That's great comics.

But, in the end, neither of these approaches succeed. At least in comics. It doesn't matter if the Batman kills, or Captain America kills, or even if Wolverine kills, because Batman, Captain America and Wolverine have to appear in comic books every month, and every story requires more antagonists, more evil men who deserve killing. Put the Joker in prison and he escapes. Kill him and he just comes back from the dead. Ultimately, both approaches are doomed to failure. The comic book superhero will never bring justice to the city ... until his book is cancelled. See James Robinson's Starman.

More soon. I am teaching an upper division English course at UCR next quarter on graphic novels and comics, and a course in the spring on the superhero narrative. So you will see a lot on these pages about those courses. You may even be one of my students!
Posted by Jason Tondro at 8:24 AM 3 comments: