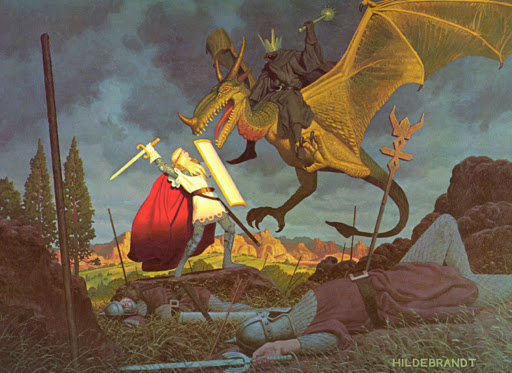 This week I finished Tolkien's "The Fall of Arthur" and noted, in the obligatory Facebook capsule-review, that Tolkien's portrayal of Guinevere is entirely unsympathetic. This led Friend of the Blog Kody Lightfoot to suggest that Tolkien "succumbs" to a patriarchal habit of writing women solely to articulate a male "Heroic Journey." Accusations of misogyny or patriarchy in Tolkien are not, of course, new, and Kody (with whom I share a deep abiding love for the character of Eowyn) was not trying to indict Tolkien's body of work so much as this particular text. I think she's basically right, even if I am hesitant to use the phrase "Hero's Journey" with Tolkien because, as soon as we do, we have entered The Land of Joseph Campbell, where every tale is essentialized and we lose everything that makes LotR unique in favor of an all-consuming monomyth. But Kody's prompting has led me to confront Tolkien's portrayal of women in his published fiction, by which I mean Lord of the Rings and The Hobbit.

Readers of Tolkien know that the problem is not that Tolkien writes poor female characters; Galadriel, Eowyn, and Arwen have personal, moving, and very compelling stories, even if Arwen's is largely limited to the Appendices and Galadriel's saw print only after Tolkien's death. The problem is rather that there simply aren't enough of these women. If we add Lobelia Sackville-Baggins, Goldberry, Shelob, Rosie Cotton, and Ioreth, the "eldest of the women" who serve in Gondor's Houses of Healing, we may have covered every single female character who actually appears in LotR's primary narrative (that is, who isn't dead or mentioned only in the Appendices). Consider for a moment the staggering size of the male cast in this novel.

It will surprise no one to know that I have a theory about this. What I see when I look at LotR is great psychological anxiety around the creation of female characters. That is to say, Tolkien seems unwilling to create female characters that are not burdened with great meaning. He is reluctant to create a woman with a supporting or cameo role, especially if the character's female gender is not essential to that role. There are no female characters in LotR or The Hobbit who just happen to female, and whenever a minor character does appear, that character is presumed male. Male is the "normal" in Lord of the Rings, and that's a textbook definition of anti-feminist literature, but the female characters we do have spit in the face of misogyny and patriarchy in very obvious and even confrontational ways.

Quite simply, I think that Tolkien was nervous about his female characters. I think he lacked the confidence required to write women "naturally," and he was more than a little uptight about making sure the women in his book all "say something." I think he felt the eyes of potential critics in a way which he himself would have almost certainly denied. And this led him to, whenever he needed a new character, assume that character was male unless he had a really good reason for thinking otherwise. Knowing what we do about Tolkien's Roman Catholic faith, Tolkien grew up and embraced the worldview that men and women are not fundamentally the same, but that they are fundamentally different, that God gave women different virtues and graces than men and that feminism, in what is often and mistakenly perceived as a desire for gender blindness, is misguided. (1) In our post-feminist era it is often possible for a male writer to skate by female characters by relying on their human-ness rather than their woman-ness -- by showing the things we all have in common regardless of gender -- even if the harder task of grappling with their woman-ness is judged too difficult or, mistakenly, inappropriate. But Tolkien is writing from a religious understanding that emphasizes the differences between men and women, and I think that although he wanted to present admirable and compelling female characters, he didn't have the confidence to write them casually. If they weren't serving some Higher Purpose, he cut them.

Lets use some examples.

Fans of LotR know that the introduction of the character of Strider was fairly spontaneous. Originally a hobbit who wore wooden shoes and who was named Trotter, Strider is mentioned in a letter Tolkien wrote to his son confiding that this new character had suddenly appeared in the novel, and Tolkien didn't really know what his story was, and was more or less making it up as he went along. Now, we have a tremendous advantage when we write about and analyze Tolkien's writing because we have so much material relating to his drafting and revision process. And we can see now, with hindsight, that the revision process was absolutely critical to Tolkien and frequently included major changes to the plot. It is hard to imagine LotR without Aragorn, the King Elessar, whose origins grow out of this humble hobbit named Trotter. And there are many more examples of Tolkien doing this: introducing a new character who, over the process of revision, gains a distinctive voice and character and role in the story.

Compare the character of Idis. Most of you are not going to know who Idis is, with good reason. In the first draft of "The King of the Golden Hall" -- the chapter in which Aragorn, Gimli, Legolas and Gandalf arrive in Rohan -- there are two women, not one. Eowyn is Theoden's niece, his "sister-daughter," but there is also another woman, Idis, who is Theoden's actual daughter and, therefore, a princess, Theodred's sister. Again, this is from a very early stage of the work, and you can tell because, in this version, Aragorn and Eowyn eventually marry. That's because Arwen has not been invented yet, and the whole Tale of Aragorn and Arwen cannot exist. In any case, Idis has no lines in this first draft of "King of the Golden Hall", and exists for only a few pages before she is summarily written out and merged with Eowyn.

Imagine for a minute what we might have gotten if, instead of excising her, Tolkien had left Idis in and worked with her, given her the same time to develop and change as a character that he gave to Trotter or to so many other male characters in the book? We would be celebrating Idis alongside Galadriel and the rest. But, instead, Tolkien cut her. Why? I believe (and it's only a theory) that he just wasn't sure what to do with her and, rather than leave her in, let a good idea come to him, and risk her being boring -- as he was confident doing with male characters -- he felt it was safer to cut her entirely. He just could not risk a female character that wasn't compelling. It was better to have no women than boring women.

There are plenty of moments in LotR where we could have gotten more female characters, either as walk-ons or in supporting roles. There are no female servants anywhere in the book, for example. Wouldn't Eowyn have a female servant, and wouldn't a conversation between those two women have been illuminating? Wouldn't Galadriel or Arwen have a lady's maid? Remember Bergil, son of Beregond, who kept Pippin company after he arrived in Minas Tirith, and who stood on the walls with him as the Muster rode into the gates. Would that chapter have been richer or poorer if Bergil had been a daughter instead of a son?

I have a confession to make: the first time I read LotR, I thought Merry was a girl. In my defense, I was only 12 and "Mary" is clearly a girl's name. Other than the fact that everyone kept referring to "Mary" as a he, the novel worked perfectly well with her in it, even at the Scouring of the Shire when that kick-ass girl "Mary" summoned the hobbit folk and routed Sharkey's men. I liked that book. I still love it today. And whenever I write fiction, I invariably begin with a female protagonist, something Tolkien never seemed to have the confidence to attempt. But although contemporary authors are far more comfortable writing female characters, that doesn't mean Tolkien didn't do it well when he felt he had something worth saying. For Tolkien, men are allowed to be without meaning, but women -- recipients of a divine grace a man can recognize but never own -- cannot.

(1) EDITED: It is absolutely important to clarify that "gender-blindness" is not the goal of feminism, and critics who maintain that feminists want to tell stories in which "It doesn't matter if a character is male or female because the story will read exactly the same" are misrepresenting feminism. The fact is we live in a world in which being a woman has enormous consequences, and telling a story in which a woman's experience is not affected by her woman-ness is just as fantastic and imaginary as a novel with Orcs, Elves, and magic rings. My thanks to Kody Lightfoot for helping me to attain better clarity on this point.