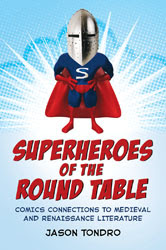 A tip of the hat to Michael Torregrossa and his Medieval Comics Project who noticed that my upcoming book is now available for pre-order from McFarland & Co.

This will be my first academic book, and the project began as my dissertation, An Imaginary Mongoose: Comics, Canon, and the Superhero Romance. Normally dissertations require extensive rewriting because they are written for the idiosyncratic requirements of a three person committee, but my case was a bit different. I had always written it for publication, and the only major shortcoming of the book was that it was a a bit short. Also, I did not really like the chapter flow, which demonstrated a bit too clearly that I was running out of time as work on the diss came to a close.

So first I revised everything to change it from a book written for Renaissance scholars who know little about comics, to a book written for comics scholars who know little about Renaissance literature. Then I added a new chapter on Shakespeare and comics, which let me write about Alan Moore, Claremont, and Peter David in addition to the obligatory Gaiman, and which ended up being the biggest piece of the final book. And then I reorganized by moving the chapter on Kirby, Ben Jonson and Eisner from 4th place to 2nd, following the Spenser/Iron Man chapter. The Jonson led well into the Shakespeare material for chapter 3, leaving my arbitrary survey of Arthurian themes in comics for chapter 4, serving as a good introduction for the final chapter on Grant Morrison, Invisibles, JLA, and Seven Soldiers of Victory.

I always knew McFarland would change the name of the book. It doesn't bother me. I happen to love the original title, but in my mind that book has already been published. "An Imaginary Mongoose" is my original dissertation. This is a different book, significantly larger, revised from front to back, better informed and aimed at a different audience.

I'm also extremely gratified that, despite all my anxieties and concerns, only a single image from my initial list of 67 has been cut. We're using these illustrations under academic fair use and I didn't have to struggle for any permissions. What a relief! Some of my fellow comics scholars have been delayed a year or more trying to get permissions, permissions which should not even be necessary.

We're hoping for a release in the Fall of this year, but Winter (perhaps sliding into early next year) is a possibility. The book is still in copy editing, but with any luck, by Christmas, it will be out.
Posted by Jason Tondro at 1:59 PM 1 comment:

This is the course I will be teaching this summer at UCR. It's a lower division English course, so will not be aimed at English majors, but it does fulfill a breadth requirement for non-majors and English folks may still find it useful as pure credits. 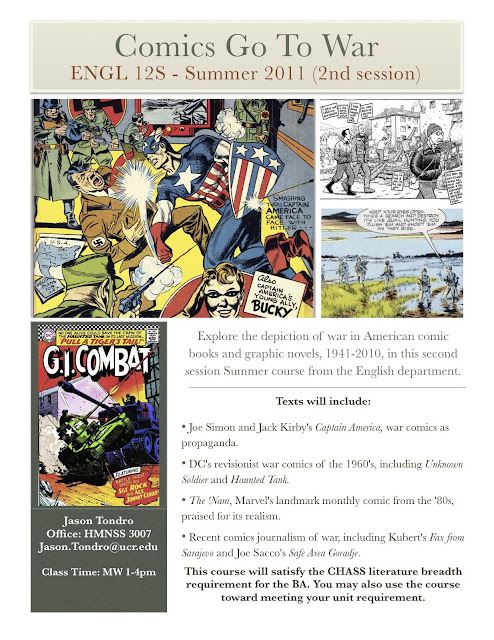 This week I got to sit in on a Vigilance Press podcast with Chris McGlothlin, author of pretty much my entire shelf of Mutants & Masterminds books. Chris is a very thoughtful and generous guest, and we had a great time talking superhero comics, games, and films.

You can check it out here.
Posted by Jason Tondro at 12:14 PM No comments:

My review of Daniel Corey's Moriarty: The Dark Chamber, published next week by Image, is up at Comic Book Therapy.

You can check it out here.

Posted by Jason Tondro at 4:48 PM No comments: