Today Comics Alliance posted this wonderful piece by Louie Joyce, a portrait of Frank Miller made up of quotes from his work. Perhaps because I was trained by Robert Essick, one of the world's leading Blake scholars, the moment I saw this portrait I immediately thought of Blake's Laocoon. This piece, perhaps his last artistic work before his death, depicts the famous statue surrounded by Blake's thoughts on art, God, science, and money. According to Essick, the story goes like this:

[Samuel] Palmer was showing [John Clarke] Strange an impression of the print [in 1859] and told Strange that, when Blake gave Palmer the print, Blake said "you will find my creed there." Thus the comment is second hand, but the authority is pretty good; I doubt that either Palmer or Strange made it up. This statement was first recorded in G. E. Bentley, Jr., Blake Records, 2nd ed. (2004), p. 726.

The connection between Blake and comics has been examined before. Blake's work is not comics, but it is an amazing body of text + image in combination that has influenced comics scholars like Donald Ault and comics creators like Alan Moore. Blake appears in Moore's From Hell, but really stars as the subject of Moore's five part poetry sequence Angel Passage in which he, and I shit you not, attempted to conjure up the spirit of William Blake during a live performance in the Tate Gallery.

As to who would win in this ultimate psycho political throw down, all I can say is that Blake had a temper, worked with his arms every day of his adult life, and almost got thrown in jail when he roughed up a soldier of the King. Miller is kind of a wimpy kid. So I'm just sayin.

If you can't read Blake's lines, you can find a good transcription here.

You can see more of William Blake's amazing text/image combinations at the Blake Archive. 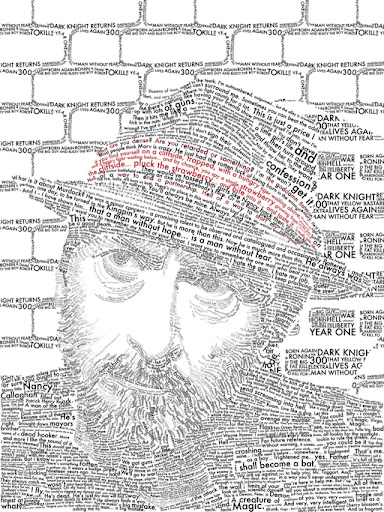 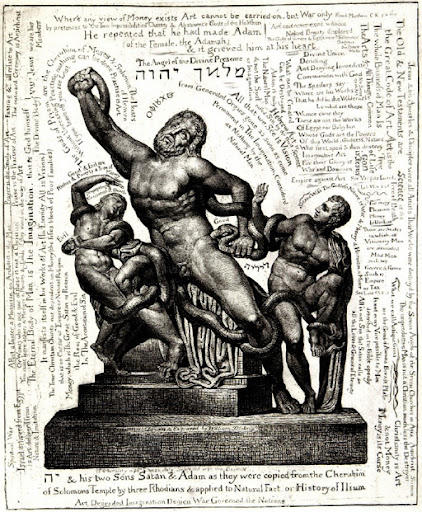