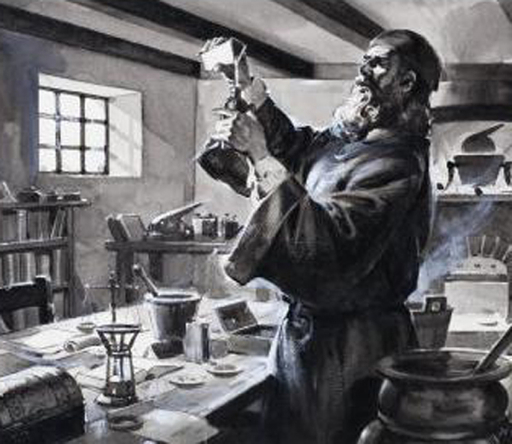 It is the year 1290 in the reign of Edward Longshanks, and Gifted students from throughout the British Isles and western Europe come to Oxford to learn the Art from magi of the Order of Hermes. You are one of these pupils.

Oxford is not a single school, but a collection of Colleges, each financed and run by a single Hermetic House. Students at any of these Colleges register with a master who guides their education; they attend mandatory lectures, which might be given by any of the masters present at Oxford, not just the student's College. Roger Bacon, former Chancellor of the University and member of House Bonisagus, is now a professor Emeritus, living in Oxford and only occasionally appearing in public.

Most students enter between the ages of 14 and 16; the best graduate as magi of the Order ten years later (it is very common for students to be held back for one or two years). Before arriving at Oxford, these students have spent years learning Latin and the liberal arts, often at parish schools. But parish schools are not rigorous enough for aspiring Oxfordians; cathedral schools at Canterbury (in the south) and York (in the north) train students in advanced Latin and the liberal arts as well as natural philosophy. Wealthier students avail themselves of private tutors instead. The Gift has made this early education a trying experience, as teachers uniformly consider their students lazy and shiftless cheaters.

The Order's interest in Oxford dates back to the mid-12th century, but the turning point was in 1209. In that year, a murder on campus and the legal controversy which followed sent most of the masters and students to Cambridge. By the time they tried to return five years later, magi of the Order had taken over. When the University re-organized itself under a Chancellor appointed by the bishop, it was as a place of learning devoted primarily to the responsible and ethical use of magic.

Every student at Oxford identifies with his College and House. The Colleges currently established at Oxford include, in order of founding:


More on the Order: The Order of Hermes is made up of many Houses, some large, some quite small, generally distinguished by a particular style or tradition of magic. Most of the lineages traditionally considered to be part of House Ex Miscellanea or minor Mystery Cults are, in Oxford Magica, distinct "minor" Houses. These may be allied with a more famous House; for example, the British folk traditions are mostly allied with Diedne, the Order of Odin, or Merinita. Learned magicians are welcomed into Bonisagus. Some major Houses, such as Flambeau, Tremere, and Jerbiton, are stronger in Europe where they sponsor other universities and have not yet organized at Oxford. House Mercere and Guernicus do not exist as Houses; "Redcap" and "Quaesitor" are offices held by mundane messengers and investigative magi, respectively. If you have additional questions about the Order and its history (Schism War, Tytalus Corruption, etc.) the answer is probably "I haven't decided. What do you think would make a good story for your character?"