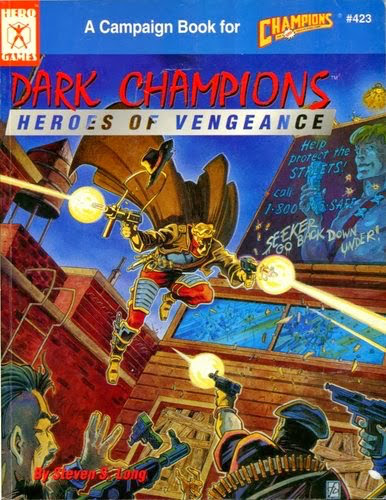 Every business has its luminaries. In the business of roleplaying games, those luminaries are people like Monte Cook, Steve Jackson, and Robin Laws. I don't personally know any of those people. But I do know one guy who is, without question, a gaming luminary, and that guy is Steve Long.

Steve rejuvenated Hero Games and the Champions RPG with his book Dark Champions, which became an instant classic and the cornerstone of a whole series of books that kept Hero Games more or less in the black for years. Marked by exhaustive research and filled with enough story for many campaigns, the Dark Champions line perfectly captured the zeitgeist of 1980s 'dark and gritty' comics, what many people now call the Iron Age. Champions was my game throughout high school and my undergraduate years, and I went back to Steve's books constantly. They were a well that never ran dry.

You'd think that would be enough for one guy. But it was not. Steve re-invented himself, joining the design and writing team for both the Lord of the Rings RPG and the Star Trek RPG, two of the biggest intellectual properties in the world. These are projects millions of fans would give anything to participate in.

As Brandon Blackmoor instructed me once, the only way to make a small fortune in the gaming industry is to start with a large fortune, and Hero fell victim to economic pressures and collapsed. And this is when Steve started what, to me, seemed like the third great phase of his career in gaming, because he got together with a couple of other gentlemen and they bought Hero Games. Famously prolific, Steve proceeded to rewrite the product line from the ground up, in the process creating a single "Heroic Universe" in which all of the games of the Hero System fit. So, for example, Fantasy Hero's "Turakian Age," a sword-and-sorcery setting dominated by an evil lich, was actually the same world as the pulp adventures of Justice, Incorporated, the modern-day superheroics of the Champions, and the far-flung adventures in Star Hero. Film audiences are used to the idea of a shared universe now, thanks to Marvel's success, but this was ground-breaking stuff in the '90s. I myself wasn't entirely sure it was the right way to go. But it had vision, and I don't think anyone other than Steve could have pulled off a project so damn big so damn well.

Somewhere in all this, Steve allowed me to join Rogues Gallery, which was the Hero System fanzine, and I humbly contributed my occasional pieces, surrounded by people like Steve and Aaron Allston and so many other amazing talents who graciously gave me helpful advice. When I applied to grad school, I applied to the University of North Carolina in Greensboro, and was accepted. Steve lobbied hard to get me to move there, where I could join his gaming table and, potentially, help write on the sprawling new line of Hero Games products. I didn't take him up on his offer. Maybe I should have.

This week I learned that Steve has developed colon cancer. As I think you can tell by now, this is a guy for whom I have nothing but admiration. If there is anyone in the world who can kick the shit out of colon cancer (you have to laugh, people. You have to laugh) it's Steve.

He could probably use some help paying medical bills, but no one's asking you to throw money away. Steve has written and edited more game books than most of us will ever own. Whether your interest is in organized criminal networks or Mesoamerican mythology, Steve has written something that you are interested in, even if you don't know it yet.

Take a look at his books on Amazon.
And here's the Hero Games store, where you can browse tons of other books he has written.
Posted by Jason Tondro at 5:38 PM