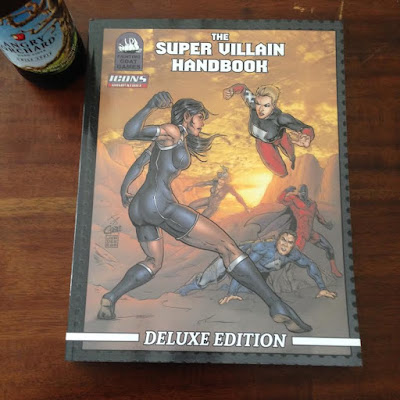 This book is the end point of about two and a half years of work by many people, first and foremost Mike Lafferty, my friend and publisher at Fainting Goat, and Walt Robillard, who ran the successful Kickstart for the SVH and has been a constant cheerleader for the project. I am also deeply in debt to Ade Smith, who did layout, and to my amazing artists, Dionysia Jones, Jacob Blackmon, Joe Singleton, and Joseph Arnold. Quite a few others became Kickstart backers or helped out as I crowdsourced ideas; too many to name, but you know who you are and I have not forgotten you.

It feels good to hold this book in my hands. It's 220 pages, full color, and I feel a sense of accomplishment. This book is the counterpart to the Field Guide to Superheroes project I did with Vigilance Press, and both ultimately have their roots in a course on the Heroic Epic I took with Darren Miguez back in Vegas, so long ago I honestly don't remember the date.

The original list of 40 villainous archetypes didn't change too much from my initial list all those years ago, though it grew a little to include 21st century boogie-men like the Terrorist and the Evil CEO. A handful of the characters in this book were invented long ago for the Worlds of Wonder setting, but I always had more ideas for heroes in WoWo than I did villains, which is why the Field Guide to Superheroes was so easy and the Handbook took many years. I have come a long way when it comes to collaboration; I have learned to let artists design, because they do that better than me, and I have learned a bit about how to nudge concepts artists give me into something I am more enthusiastic about writing.

One of the key parts of this book is the YOUniverse, which is a setting embracing the concept of public domain. There are several public domain characters in this book, including the Black Terror, Hugo Danner, Stardust the Super-Wizard, Women in Red, Miss/Black Fury, Green Turtle, Night Bird, Wolf Savage, and even Dracula, Robur the Conqueror, Captain Hook, and the Egyptian sorceress called the Beetle. Other public domain characters -- like Sherlock Holmes, Amazing Man, and Lash Lightning -- feature in the background of these characters even if they're not personally represented. But all the 55 characters in the Handbook are public domain, even if they did not start off that way. I did this for a very specific reason: I was tired of inventing settings which, a few years later, I could not continue writing because someone else owned them. This happened with Worlds of Wonder. I didn't want to spend all that time making something and then be unable to develop it. Mike was totally supportive of the idea of making the characters public domain, which was totally against his own self-interest. I can't express how grateful I am.

The idea of including support for running super villain RPGs came from reader feedback. I was initially cold on the idea, as I prefer games in which the players cooperate and are heroic. But as I delved into the idea and read up on what other writers had done with it, I began to see how I could help GMs and players in an all-villains game. I ended up with nine different campaign models for super villain gaming, and most of them, I would totally be happy playing in.

We priced this book at $20 which, honestly, is a steal. For a book this size, with interior color art, the fair price is at least $25 and maybe $30. If you buy the print book, you also get the PDF for free (something I first saw with Evil Hat's Fate games, and loved).

If you are interested in super villains -- how they are portrayed in comics, TV and film, the stories they tell, and the symbolic meanings they embody -- I think you'll like this book. And if you're a gamer, you'll love it.

Check it out.
Posted by Jason Tondro at 4:30 PM