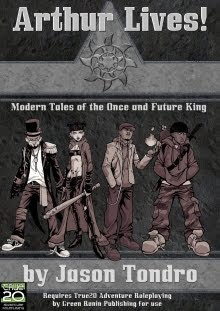 So I have a new game out. Some of you have heard far too much about this game, others may not have heard anything at all. I had great fun writing it, it turned out very well, and the first part has gone on sale at RPGNow.

AL! (as we call it around the house) is a game of cinematic adventure, occult conspiracy, and urban fantasy. Players take on the roles of Arthurian characters who have been reincarnated in the present day. Character creation is wide open -- if you don't want to play a famous Arthurian hero, you can play a minor character with a shot at the big leagues, or a brand new character of your own invention whom we have never heard of until now. AL! is envisioned as a series and this book kicks off Season One; the Narrator's Guide and an introductory adventure are in the pipeline and, if response is good, Season Two will follow.

If you were a playtester for AL! and I haven't already mailed you a copy of the published .pdf, shout out now for your well-earned game swag.
Posted by Jason Tondro at 5:19 PM