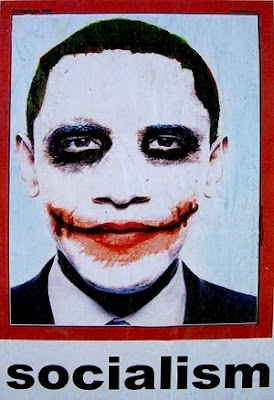 Via Andrew Sullivan, these posters are going up around LA.

Sullivan was confused by this depiction of Obama as the Joker:

It's graphically striking, but politically obtuse. The Joker is a wild man; Obama is no-drama; the Joker is an anarchist; Obama is a community organizer. Obama's careful politicking, his almost painful resistance to emotionalism, are worth lampooning, because they at least show an understanding of him, which is essential to successful mockery. But portraying him as an anarchist white terrorist recently made famous by Heath Ledger? To prove what exactly? Or is even asking for a reason at this point a silly thing to do?

It's not a silly question. But the answer has nothing to do with politics, socialism, or anarchy. Heath Ledger's portrayal of the Joker was, at its core, an amazingly effective portrayal of evil. With his scarred, blood-red grin, his constant lies, his brilliant scheming and his casual murder, the Joker seized the imagination of audiences who discovered the character for the first time, and completely re-defined the character for those who only knew the Joker as a goofy purple-clad straw man.

The creator of these posters wishes to portray Obama as evil, manipulative, and smug over his ability to deceive all of us. And Heath Ledger's Joker is the first, most visible, and memorable image of that evil that any movie-goer thinks of. The fact that Ledger is dead, and won a posthumous Oscar for his efforts, contributes to the visibility of this particular image of Evil.

Trying to read the politics of "The Dark Knight" is just a drive down the wrong intellectual highway when it comes to these posters. And, to be honest, the film's politics are actually quite muddled, with Batman eavesdropping on all of Gotham City as Bush did, but yielding these "war powers" to an ally who destroys them after use, only to see Batman martyred and made into a villain to be hunted down by the city that unjustly vilifies him. It's all a bit too Bush-Apologist for me, thanks.

Hm, maybe the politics of the film have more to bear on this than I thought.
Posted by Jason Tondro at 5:54 PM