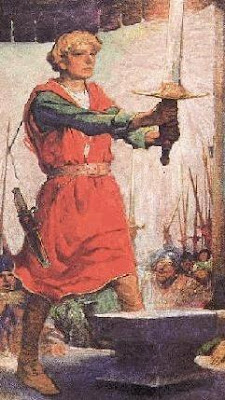 So I have been spending my spare hours this week working on the Savage Worlds version of Arthur Lives. The two games are very different, not least because only one has classes and levels. True20 has a certain presumption of action-worthiness built into the system; your character cannot go up in level and be completely helpless, because your attack bonus, defense, and saves all go up with you. Yes, you could pick useless powers, and no doubt some players do that, put if you put a gun in the hand of a 16th level expert, even if that character has refused to acquire Firearm Proficiency, he'll still be practically invulnerable to low-level attackers and be able to shoot them dead.
Savage Worlds doesn't work like that. Instead of using rules to push your abilities higher, it relies on carrots and sticks. You want to improve your Fighting skill? You'll have to pay a penalty unless you also increase your Agility. And as soon as you do that, you've made yourself better at all kinds of things, not just Fighting.
True20 has long lists of feats, and characters accumulate a lot of them as they go up in level. Savage Worlds uses edges instead, but there are fewer of them and an individual character will have fewer of them on his sheet.
But the really big thing I am noticing is that Savage World's emphasis on what they call "Fast! Furious! Fun!" means that the only magic is combat magic, and the rules are very thin on anything that doesn't involve fighting. True20 lavishes effort on crafting, for example, so a character can make magical items, potions, explosives, and what have you. None of that exists in Savage Worlds. True20 has all these ways for characters with high Intelligence, Wisdom, or Charisma to hold their own in combat; in Savage Worlds, none of those alternate combat routes exist. Some of these mechanics I can let go, but others I have to create, because Arthur Lives is essentially a game of occult conspiracy. There's plenty of action. It's a cinematic game. But it also needs to have things like ritual magic, the creation of enchanted items, magic potions, and more.
At the same time, I'm glad to have a game system with rules for chases and vehicle combat. That will help out the knights in AL, who tend to have vehicle skills and who want to put those skills to use. Each system is different, and I certainly recognize that and am happy to work around it. But I do worry that Savage Worlds players are going to see this game, with all its ritual magic, its crafting, its non-combat spells like supernatural travel and faerie refuges, and they're going to accuse me of "not being Savage Worlds enough."
Time will tell, I suppose.
Posted by Jason Tondro at 11:42 PM