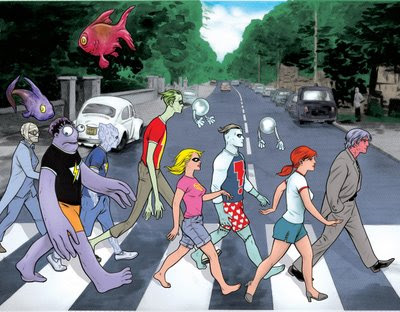 I'm two-thirds of the way through my D&D4e campaign and everyone seems to be having a (mostly) good time, so it's not like I have any time to run anything else in the next, oh, year. But a casual remark by one of my players a month or so ago got me thinking that, if I were to run a new game, and if that game was a superhero game, what sort of game might I run?
This is a hard question, not an easy one, because despite my love for the superhero genre, and the man-years which I have spent enthusing over just this kind of question, I have already run so many of these games over the years that coming up with one which isn't a rehash of something I have already done is a real corker. Dark and gritty vigilantes? Done. Most powerful heroes in the world? Done. Play yourselves with super powers? Done. I have had to get fairly creative the last couple of times, and the result was my POTUS campaign (the heroes are secret service agents in the 2008 campaign) and a take on the "Kooky Quartet" in which every member of the World's Greatest Hero Team quits, and the only people left to stand up and fill the roster are little-known other guys who would have fit better in the Mystery Men than the Justice League.
Both games were fun, but what do I do now? I have a setting, one I call Worlds of Wonder, but that doesn't really tell me what sort of a game to run. My biggest regret is I never got to run my Tunguska 12 campaign idea, but it was always timed to the centennial of the Tunguska event and that has come and gone. But thinking about it, I now have two ideas, which is something at least.
I would like to do a "common origin" game, in which everyone gets their powers at more or less the same time, during the game, and this creates a bond between them that keeps them together even when they don't necessarily like each other all that much, or if one of them does something the others don't agree with. I've spent some time fiddling around with this in other games; Tunguska 12 would have accomplished this as well. But to make this work, you have to come up with an origin which doesn't restrict the players too much. I can't say, for example, "All right, you are all astronauts," because, well, what if you don't want to play an astronaut. Of course, none of the FF were astronauts and they all went into space on a rocket ship, but most players find that all pretty laughable. But I digress.
So my idea was to put all the players on jury duty together. I mean, if you have a driver's license, you can be called for jury duty. I suppose some people are exempt, but most of those people -- cops, government officials -- I could put in the courtroom anyway from their job. And jury duty is such a cross-section that is allows almost anyone. Also, if its 12 people plus other people in the court-room, then there's my cast of NPCs who recur throughout the series. That is, the guy who is on trial, he gets super powers too and becomes the villain of the series. Witnesses in the courtroom, the bailiff or court recorder, the lawyers, these all become recurring cast, because they all get powers too.
And heck, "The Jury" is even a pretty good name for a super team.
I have no idea what powers the Jury would get. I'd like to leave that up to the players. I don't know what suddenly causes them to develop super powers. It must have something to do with the case that is on trial. Maybe there's some high tech gizmo as Exhibit A. Maybe the defendant is the victim of a poison gas attack. Maybe terrorists try to blow up the court room. No idea. Aliens, maybe it's aliens! Nah.
The other idea came to me today as I was finally reading Morrison's "Black Glove" trade, in which the Batmen of Many Nations appear. I think it might be kind of neat to do a "Let's get the Band back together" story, in which the players have all been superheroes for ten years or so, and they used to be on a team, but the team broke up, and now they are all called back together. Maybe it's for a dopey reason like a reunion or a publicity pic. Maybe someone is making a movie or a new book is coming out, and its all for the press. Or maybe someone has called them all together in true 12 Little Indians style. But the point of this game would be that we would not know, when the game started, why the Band broke up. We would figure that out during the course of the campaign, maybe using flashbacks or parallel stories in which some clue from a current case reminds people of their Last Case way back in '99 or whatever, and it slowly gets spooled out a little thread at a time.
And, again, The Band isn't a bad name for a superhero group.
So those are the two superhero games I kind of want to run, right now. Or, rather, they're the two games I think have good possibility, and would be fun, and workable, if I had time to run a superhero game. Which I don't. But you know. I can't stop thinking.
Posted by Jason Tondro at 9:56 PM