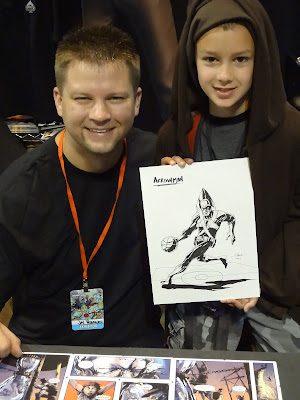 I spent last week at the Rocky Mountain Conference on Comics and Graphic Novels and the subsequent Denver Comic Con. It was an enormously fun and profitable time. I got to spend the first two days learning from some very smart people working on comics across the spectrum, and then I got to spend a couple days geeking out (not like I don't do that anyway) and visiting with friends like Mike Lafferty and my sister Suzanne, her husband Chris, and my nephew Jake. Long live Arrowman!

I think it was on Thursday when Hannah Menzies and Doug Singsen began talking about religion and superheroes, and Doug graciously suggested I might have something to contribute on this topic. Not that anyone has ever been able to get me to shut up in the first place, but it was kind of him to invite me.

The first thing we should acknowledge on this topic is that no one is better qualified to opine on it than A. David Lewis, who has been writing comics on, and studying superheroes with, religious themes for years. And A. Dave, as he is known in these here parts, besides having a Ph.D. in Religion and Literature and being an accomplished scholar, blogger, and comics creator, has a skill at self-marketing which I am openly envious of, so the fact that I am plugging him here is just demonstrating how well he has cornered this particular field.

There are also several books on the topic, most of which I have not gotten around to reading yet. One that I have read is The Gospel According to Superheroes, but I don't especially recommend it, because while some of its arguments are interesting, it typifies the biggest problem with books of the "Comics And ..." variety, and that is that while the "And..." part is always well researched and documented, backed up by theory and criticism, the "Comics" part is not. The only book or article about comics referenced in The Gospel According to Superheroes is McCloud's Understanding Comics, and as those of us in the field know, that is the beginning of the conversation, not the end. I have, however, heard rave reviews of Do The Gods Wear Capes, including from Kent Worcester, who is no slouch in this department, and I look forward to reading it. We should also acknowledge Reynolds' Superheroes: A Modern Mythology, which I think most of us can agree was published ahead of its time, and which has stood up surprisingly well over the years. It's also very approachable by students, and that is no small thing.

With the necessary preamble out of the way, we can get back to the question, which I believe goes something like: "So: Superheroes, Religion; Discuss." 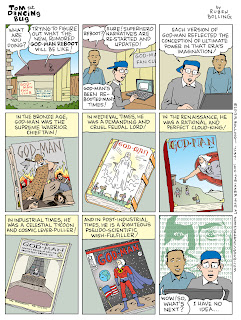 It seems to me that religion intersects with superheroes in the same way that most things intersect with superheroes, and that is in the world of metaphor and allegory. Some people -- like Tom the Dancing Bug and his God-Man strip -- have had a lot of fun suggesting that superheroes are filling the role of God or gods to us these day, but I think this is a bit of a deceptive trap. The superhero is an American invention and Americans do not pray to or worship Superman or Captain America. Mentally healthy individuals do not believe Superman or Captain America exist in the same way they might believe God exists, even when they do decorate their bodies with indelible Superman symbols.

But what superheroes are really good at is telling stories in shorthand; using symbols we all recognize in order to tell a powerful and resonating story with great economy in six, or eight, or twenty-two pages. So, for example, when we see Superman's father send his only son to Earth, we get it. When that infant from one world is rescued by parents of another world, where he is raised in ignorance of his true heritage, only for it to be revealed later in a moment that forces him to choose which of his pasts he is going to embrace, we get it. When Superman sacrifices himself for others and then falls back down to Earth with his arms extended, we get it. And the reason we get these stories, the reason we feel them in our gut, is because they are using the vocabulary of religion as a kind of shorthand for some very complicated ideas. When Clark finds out that he was born on another planet, that the parents that raised him all his life are not the ones who gave him life, and he is forced to choose, a good writer can tap into Moses's personal dilemma and can even play with it. So when, in some stories, Clark embraces his Kryptonian heritage, he's more like Moses, who embraces the fact that he is a Jew and becomes a champion of the Jewish people. But when Clark says no, no, I might be biologically Kryptonian, but in my head and in my heart I'm an American, it's almost like a reverse-Moses. Superman becomes Bizarro-Moses, the Moses who chooses to be Egyptian after all.

Let's take the New Gods for example. If ever there were superhero characters who seem to be about religion, it would be the New Gods. I mean, it's right there in the title. And yet, Highfather and his kind are never worshipped. When worship happens in the New Gods, it is always directed towards Darkseid and is always portrayed as a deeply awful and compromising thing. Orion, Mr. Miracle, Lightray, Metron and the other characters are deeply symbolic, but they are no more gods than Paul Bunyan is a god. What they do is allow us to talk about God in a new, fresh, way. When it is revealed that Highfather does not call the shots on the planet of New Genesis, but in fact answers to a parliament of children, we are reminded that the meek shall inherit the Earth, that the powerful should always answer to the needs of the lowest among us. When Mr. Miracle escapes from yet another enemy without ever throwing a punch, when he is "surely killed" only to rise again in a daily miracle, we are reminded that peace and non-violence are the heart of Christian teachings. The New Gods are, in fact, not the ultimate power in their own setting; there is a disembodied hand which writes on a wall, and that hand belongs to the Uni-Friend, a symbol so obvious that Kirby didn't have to say anything more about it. Ultimately, the New Gods aren't gods at all. They're people of faith, who revere something more powerful than they, something without form but all-loving and all-knowing, something they struggle to understand and live up to. They're us, basically.

Faith is an important part of American culture and I don't see that changing any time soon. It seems to be perfectly appropriate then for superhero comics to use the symbols and language of faith in their stories, because these are symbols and language that most Americans recognize. Which means those scenes work, and will continue to work, for a long time. But in superhero comics, faith has generally been a secondary topic. When it is directly addressed, such as in Frank Miller's Daredevil or Claremont's Nightcrawler stories in X-Men, it was usually an eye-opener, because these sorts of stories were so unusual. Stories like Starlin's Infinity Crusade, Denny O'Neill's Question, or Starlin and O'Neill's Batman story The Cult, were considered "edgy" at the time, because they used the language of Christian religion in morally ambiguous ways.

But filmmakers have been much less hesitant to use religion in superhero films. Personally, I blame the crucifixion pose for this. That damn pose is easy to do, common in films from Superman to Alien: Resurrection, and directors have gone to it so often and so repetitively that I'm always surprised to see a falling action star who does not adopt it. And because these films have made a huge commercial impact on the superhero business, the frequency with which Christian religious symbols have been used in films has bled over into superhero comics, so that now Nightcrawler has, in the comics, become a priest.

I'll leave with one last observation, and that is that some of the best writers working in superhero comics have used their names and reputations to tell stories which give intensely personal stories about faith. In this bucket, I place Morrison's All-Star Superman as well as his non-superhero book The Invisibles, and also Alan Moore's Promethea. All-Star and Promethea are not books which could have been published when their creators were young. Morrison and Moore had to attain a certain invulnerability in the marketplace first. In All-Star, Luthor is converted to good when he sees the face of God. He acquires Superman's powers and, in this state, physically perceives a single intelligence which organizes the universe. We don't see it. But Luthor does and, by necessity then, Superman has. And this explains much about Superman's faith that "there's always a way," in his unshakeable confidence in the innate goodness of all human beings, because he knows there's a God, and God would not allow the world to be a fucked up and unjust disaster. Superman is not at all a being of faith, because he doesn't need faith. He can see God!

And I could unpack Promethea here too, but honestly, you won't read it anyway. Which is a real shame, because it's an amazing book. But when the protagonist goes on a metaphysical tour of the universe in which the Kaballah is represented by subway stations (that's just one issue) and she meets Jesus, God, and the Devil (that's another issue), and has Solomon decide whether or not she gets to keep her powers or cut them in half (a different issue), well, let's just say it's a book about religion and leave it at that.
Posted by Jason Tondro at 12:37 PM