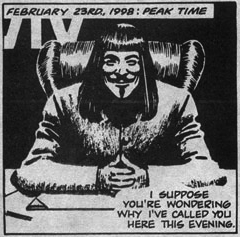 This, too, is the fault of Hannah Menzies. Hannah is working on a much-anticipated (by me, at least) book on Alan Moore the magus and as we sat in a panel a couple weeks ago in lovely Denver, she leaned back and casually asked, in that way of hers, "How do you think V fits into Moore's body of work?" I rattled off some top-of-my-head answer, but the truth is I have not been able to stop thinking about that question. I think it's a really good one.

Because if you think about it for half a minute, you could probably list a dozen ways in which V for Vendetta is unlike everything else Moore has written. Most obviously, it is an aggressively political work. At least on the surface, it seems to argue for a pretty specific agenda of armed revolution. This is one of the reasons students eventually get into it (once they get past the large cast of characters and Lloyd's art style), and it's one of the things emphasized in the big-screen Hollywood adaptation. Is there anything else in Moore's work which is as polemic as V for Vendetta? And the book's glamorization of the charismatic Great Man leader-hero is so much at odds with the rest of Moore's work that it kind of boggles the mind if you think about it. Even the little bits are tremendously out of character; one of my favorite bits from V is the short story called "Vincent," but it is hard to imagine the infamously-verbose Alan writing another story without any text at all.

I want to acknowledge from the get-go that this is an extremely problematic text, to use the academic slang. And by this, I mean to say this book is pretty fucked up. Imagine a scene, before this movie came out. Imagine a grad student trying to explain to his seminar how V kidnaps Evey, interrogates and tortures her, and when it is all over, she thanks him for it. Imagine the weird looks on everyone's face. Yeah. That was me, trying to explain the most problematic scene in V, back in about 2002.

It will never cease to be a mystery to me that the filmmakers kept that deeply troubling and problematic sequence for the film and then cut everything else, material which was not nearly as offensive, and replaced it with pap. In the film, Evey goes from being an aspiring prostitute working at a match factory (a match factory!) to a cog in a network media machine who is just out after curfew visiting her gay friend. And this is just one obvious example of the way V has been sanitized for a popular audience. But they kept the craziest scene, the scene that must have drawn them to the book in the first place, because it is just so grossly offensive. 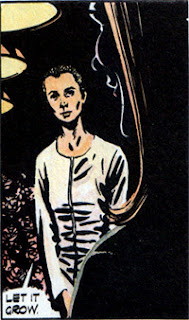 But I maintain that the book does have a conscience, and that you can see that conscience at the end, when V enlists Finch to help him perform assisted suicide. V is a wicked man. He's doing some good things, but he remains a wicked man. And according to his own code of behavior, a man must be responsible for his own actions. And that means that the wicked must be punished, and V must die. He knows this. He has judged himself and found himself culpable, and he does not "die" at the end so much as "allow himself to be executed" -- by Finch, the good man who has done wicked things, by the real hero of the story who is V's mirror opposite. But Evey, who has rejected that way of life, deserves to live. And so live she does.

Some have argued that David Lloyd had far more influence over the book than Moore's other creative partners, and I recognize that Lloyd came up with things like the Guy Fawkes connection and so on, but I am not entirely convinced that we should just throw our hands up and blame Lloyd. Moore's collaborative process has had more light shed on it than many other creators and while he does seem to be the only person who writes his scripts, he's not been shy about giving credit to creators on Watchmen or elsewhere.

Let's try to get specific with the question: What does V have in common with Alan's other work?

It's Literate: V is a highly literate text and character. Indeed, at some points in the narrative, V for Vendetta seems to be about Art itself, if not about literature. This begins with V's opening speech from MacBeth, it continues through physical props like the Shadow Gallery and V's frequent quotes from culture high and low, to the theater, Valerie, and "Vaudeville," and finally to the Viking funeral. Perhaps it is better to say that, at times, V is about Artifice more than Art: it is about masks and drama, but that's not what I'm getting at here. What I'm trying to zero in on is the way Moore invokes everything from Shakespeare to the Stones as muses, as badges of honor. But it comes too early in Moore's life to have much (any?) reference to Blake, as From Hell, Promethea, and Angel Passage all do.

In the End, It's Optimistic: Readers don't usually associate this with Moore, but most of his work is affirmative and positive in its estimate of human nature, though it often requires us to work through a lot of crap to get there. Watchmen feels like a post-modern ode to deconstruction until suddenly, at the end, Dr. Manhattan comes to understand that every human being is a kind of miracle, that life is worth living, and that it takes us to strange places and makes us do crazy things. Reading From Hell feels like living in a claustrophobic meat locker, but by the time we reach the end, there's William Gull wheeling around as a confused and impotent ghost while Mary Kelly gives him the finger. A lot of the people in League are tortured and in pain, but ultimately the book is a celebration of creativity, of Art and imagination, of powers so potent and immortal that they outlast even their creators. And V has some really ugly, grubby, awful people in it. Sometimes it seems like there's no one in this book worth cheering for. But when Evey says, "Let it grow," she breaks out of that crappy world to become the best person in this book, and when she accepts the role of V, we at least know the nation is in good hands -- even if the charismatic hero-leader is an anomaly in Moore's book, and one we instinctively mistrust.

It's On Drugs: Seriously, Moore's experiences with LSD are public record and drug use informs multiple texts in his oeuvre, including Swamp Thing and virtually everything he wrote after he became a practicing magician, because hallucinogenic drugs are required for that trade (unless you are William Blake or, like him, see angels sitting on haybales without chemical assistance). The drug use in V is pretty self-contained and it enables a revelatory experience, Finch's epiphany, mirroring V's own and that which V inflicts on Evey. It is a very short jump from this to plant-sex with Swamp Thing.

It's Got Rape: As others (Grant Morrison is only the most notable) have noted long before me, Moore writes a lot about rape. Indeed, it can be a challenge to find one of his texts that does not have rape in it. Now, you can phrase this as, "Moore is obsessed with rape," or you can phrase it as, "The topic of rape is important to Moore," depending on how much of a pejorative you want this trait to be, but no matter how you say it, we have to acknowledge it's there, and V is no exception. The book starts with attempted rape and prostitution (another Moore theme, especially since he became a magus), acts no less central to the plot than the rape of Silk Spectre I or Janni Dakkar.

Personally, I find V for Vendetta a very teachable text. It works well in the classroom because it provokes discussion. There are inevitably some government-hating students in the class who get into it without thinking about it very much, the interrogation of Evey gives us a lot to think and talk about (including Aristotelean notions of catharsis, pity and fear), and the literacy of the entire book rewards close readers, who find additional meaning. YouTube videos of the song's musical numbers bring some great diversity to the classroom space. It uses symbolism and metaphor in some pretty rock solid ways. roses/Rose being only the neatest example. And it comes without a lot of the Cold War baggage that Watchmen brings. If I ever get the chance to teach a single author Alan Moore course, I am not sure I would include it. His early phase is perhaps better represented by something like Ballad of Halo Jones, and the completion of V for Vendetta was contemporaneous with Watchmen, which would presumably be on the syllabus. But when I only have time to teach one Moore comic, it's not a bad choice.
Posted by Jason Tondro at 1:43 PM