Mystique is the Loathly Lady: My review of X-MEN: DAYS OF FUTURE PAST

X-MEN: DAYS OF FUTURE PAST is an entertaining film. I still have to give the nod for "best film in the X-Men franchise" to X2, but it is certainly the best film since. 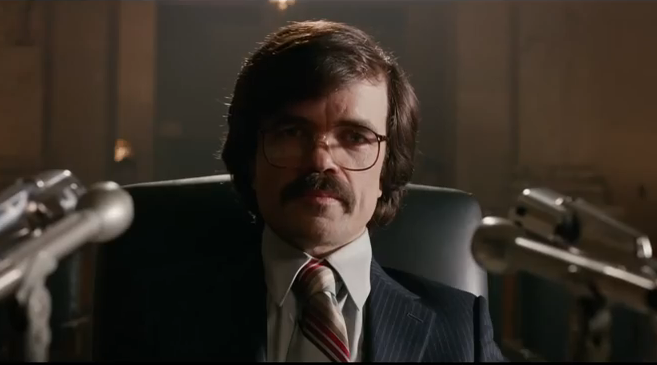 I was really interested to see Peter Dinklage on screen as Trask. In terms of the script, Dinklage's height was absolutely irrelevant. It was never mentioned once. On the other hand, visually, it was absolutely relevant. There is a certain shot you do with Peter Dinklage, apparently. It involves him being surrounded by seated figures in a U shape. And he is on trial. And whether it is Tyrion Lannister insisting he is on trial for being a dwarf, or Bollivar Trask insisting that the human race is the new Neanderthal (boy, I wish Chris Claremont was getting some money from this movie) to a Senate subcommittee, we have to get a shot of him sitting in a chair with his feet not touching the ground. You don't make that shot when you're dealing with a 5/10" actor. That shot is about the Little Guy Speaking Back To Power. I could write a 5,000 word article on that shot.

Going into this film, I have very fond nostalgia for the original Days of Future Past issues (only two of them! Consider for a moment how influential those 44 pages have been) so I was initially rather grumpy about the fact that a story about Kitty Pryde had become a story about Wolverine. But Singer understood the original story, he had a crush on Kitty Pryde the same way every other adolescent Marvel fan did at the time, and he does his best to say, in this film, "Yeah, I know we had to mess it up a little bit to get this on screen, but, you know, Hollywood." Kitty has an important role in the plot, even if she has few lines and hardly moves, and her ability to send people's consciousness back in time is never explained and has nothing to do with her actual mutant power, but what the hell. It's not like they were going to introduce Franklin Richards or Rachel Summers.

And, honestly, Wolverine's role in this film is downplayed. I consider that a good thing. He goes back into his pre-adamantium body so he's just not as unstoppable as he would later become; Singer balances the film with the rest of the ensemble cast, and this is really not the Wolverine Movie that I was afraid it would be. The fact that Logan has a traumatic flashback at the precise moment he was sent back in time to act was a little ham-handed. I probably would have tried a different direction for that scene. But Jackman did not steal the show, there was even some fanservice buttshot, and basically its a win for everyone.

And let me say that I really did not think that they would bring Cyclops back at the end. I really thought we were going to get the "Everyone lives happy ever after" ending, and Logan would get his dream girl as the music came up and he put the smooch on her. When Scott's hand came up and we heard him go "Whoah," that may have been the gutsiest move in this movie. Because very few people in that theater see Cyclops as anything but a buzzkill, and endorsing his relationship with Jean, and her choice of him over Logan, is not something most fans of the X-Men movies want.

The film was well written and well performed and well shot. This is a pretty classic Bryan Singer X-Men movie, with all his tells. In particular, I noted that while Marvel Studios movies tend to make a head-nod towards relevant social issues (like Winter Soldier's recent gesture towards the issues of the surveillance state and the never-ending War on Terror), Singer's really got no interest in that. I found it interesting to see how he took the X-Men work done on things like Last Stand and First Class and reshaped it to say what he wanted to say. Some elements of these past films he ignored, some got name-drops, and a few people had a scene and some lines, but he really embraced the new history of Charles and Raven and he made that non-romantic, familial, relationship the core of the movie. Again, I think that takes guts. Hollywood has trained us to prioritize the romantic relationship; that's what movies are about. But in this film, the romantic relationship which is implied between Eric and Raven is bankrupt, and when Eric decides he needs to kill Raven to preserve his species, it's a great plot twist which I totally did not see coming and which suddenly answered my question, "Well, they've stopped Mystique, so now what are they gonna do for the next hour and a half?"

It's a good film. Quicksilver's musical number is HILARIOUS. Oh, and tons of mutants get killed. Most of them multiple times. So all the guys that liked Man of Steel will still like this too.

POSTSCRIPT: On the drive realized I had more to say about this film.

I think it's very interesting, and great actually, that the key moment in this film is literally about a man recognizing that a woman has to have agency. Young Charles means well, but Raven scolds him because, even when he means well, he keeps talking about what she "has to do." That is, he is giving orders. Rational, moral, and good orders, but orders nonetheless. What he needs to learn is that this behavior cannot be sustained and is itself on very weak ground. Raven is, in this sense, a bit like the Wife of Bath crying out for "sovereignty."

In fact, if you look at that Tale, Raven is TOTALLY like the Wife of Bath or, rather, her story of the Loathly Lady who offers a choice: she can be beautiful but cheat on her husband all the time, or she can be ugly and be true to him. The choice Charles sees, like the anonymous knight of that Tale, is that Raven can either be Raven (a good person, but hiding her monstrous appearance) or Mystique (wicked, and ugly). But at the critical moment, Charles learns. Again, like the knight of Alisoun's Tale, he realizes there's a third option: LET THE WOMAN DECIDE FOR HERSELF. And he recognizes her agency, and lets her decide. And, like the Loathly Lady in the Tale, she smiles and chooses the best of both worlds: I will be both good and honest. I will not kill, and I will not hide myself.

Crap, now I have another article to write.
Posted by Jason Tondro at 9:23 AM