The book deadline looms; there is no way that I will finish everything and have the project ready to be mailed by the 1st of September, but if I am fortunate I will have all the text written, and will only need to complete a few final steps, including: 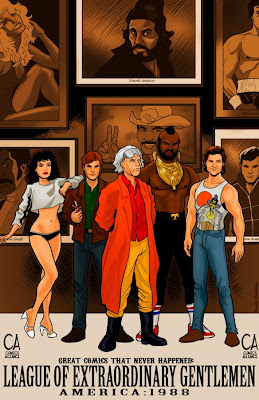 This project began the transition from dissertation to book as a 65,000 word manuscript that needed to be 75,000. It's now 85,000 and the new chapter I have written is the longest in the book. On the topic of Shakespeare, especially interpretations of Tempest, in comics, it is now literally central, being chapter 3 of 5 and filling the middle of the text. I probably should have not bitten off as large a topic as I did, and perhaps I could have cut one of the four sub-sections that make up this increasingly large chapter, but I think the end result is worth it and what I like about it is that it touches on characters and writers I didn't get a chance to deal with elsewhere in the book, such as Claremont, David, and Moore, the Hulk and the X-Men, perhaps making the book useful to people who otherwise would not have had much reason for it.
Along the way, I have essentially created three conference papers, which I suppose will get me rolling through PCA, next year's Comic Arts Conference, and any additional conference I can get myself invited to.
The road has not been without disappointments. I have been surprised at every turn by how comic writers -- usually a pretty verbose bunch who are happy to answer emails and questions -- don't seem interested in talking to me. Peter David, who is very active online, left me hanging weeks ago. Claremont never answered my emails. Moore turned down my request for an interview. This has, at times, been demoralizing and I admit to becoming increasingly jaded. It is tough to admit that a book like this simply may not be useful or important, no matter how much hard work it is. Editors have quotas and holes in their schedules which need filling; they'll sell a dozen copies to libraries here and there, and no one will ever see this book again. And yet, this is part of what we do to get position and tenure, and while we're doing it we take pride to make it as good as we can possibly make it. You have to find a sort of zen place when working on an academic project like this -- you have to be proud of it for what it is, because you're certainly not going to get rich nor famous, and with the way some great comic scholars have been savaged by critics in the academic press over the last few years, it's increasingly unlikely that one will earn the respect of one's peers.
But while you're on the journey, while you're making, it is fun and engaging and you have those moments where you look at what you are writing and admit to yourself that, man, that's not bad.
Posted by Jason Tondro at 8:16 PM