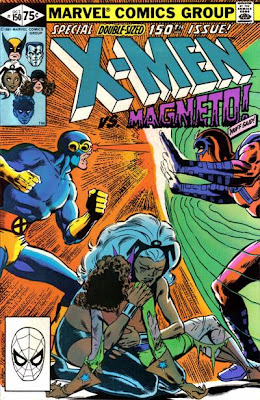 “The nations of the world spend over a trillion dollars a year on armaments. I intend to deny them that indulgence. The money and energy devoted now to war will be turned instead to the eradication of hunger, disease, poverty. I offer a Golden Age, the like of which humanity has never imagined!”

“Freedom, Ms. Forrester? There are more people starving today than there are those who can truly call themselves free. I offer peace and a good life … or a swift and terrible death. The choice is theirs.”

Reading these stories today, when the United States is embroiled in two foreign wars and a simultaneous “Great Recession”, it is remarkably easy to see the logic in Magneto’s goals, if not his melodramatic means, and Claremont goes further when he establishes the reason for Magneto’s personal commitment to this seemingly impossible goal: he is himself a member of a repressed minority. Not just a mutant, Magneto is a Holocaust survivor. In words which could have come from Prospero himself, as he laments his exile from Milan, he tells Cyclops, “Search throughout my homeland, you will find none who bear my name. Mine was a large family, and it was slaughtered – without mercy, without remorse. So speak to me not of grief, boy. You know not the meaning of the word!” This is not the first mention Magneto will make of grief, a theme which the King of Naples and his wandering son often invoke as they each mourn the other, seemingly lost forever.
The bulk of Uncanny X-Men #150 is taken up with the X-Men’s heroic but fatally doomed effort to thwart Magneto’s scheme. As in Shakespeare’s play, they are split up into small groups who wander the island. Storm has a wonderful moment in which, echoing Caliban’s plot, she finds Magneto asleep and contemplates assassinating him with a steak knife. But while in The Tempest Caliban’s scheme is thwarted by his foolish co-conspirators, who would rather play-act as noblemen than get down to bloody business, Storm’s hesitation is more noble and more in character for her: as an X-Man she has sworn a vow never to take the life of another. Briefly she debates whether it is right to kill one man to save thousands, but before she can put her newfound resolution to the test Magneto awakens and hurls her out the window, much as Prospero arrives and punishes those who dared attempt his life.
The climax to the tale comes a few pages later. If Magneto’s machines are fulfilling the role of Ariel – the supernatural enabler which allows Magneto’s vengeance to be enacted – then it is fitting that Kitty Pryde, the X-Men’s Ariel and Miranda figure, be the agent which puts that enabler out of work. Kitty shuts down the machines while Magneto is distracted by the other X-Men, and in so doing she throws the mastermind into a rage. He confronts her alone and, furious, wounds her so grievously that he believes her dead. But now, cradling the dead girl in his arms, Magneto is stunned back to his senses, and he suddenly reveals another link to Prospero: like Shakespeare’s character, he had a wife and a daughter:

She – she is a child! What have I done?! Why did you resist? Why did you not understand?! Magda – my beloved wife – did not understand. When she saw me use my powers, she ran from me in terror. It did not matter that I was defending her…. That I was avenging our murdered daughter. I swore then that I would not rest ‘til I had created a world where my kind – mutants – could live free and safe and unafraid. Where such as you, little one, could be happy. Instead, I have slain you.

This is Magneto’s great soliloquy moment, when he confesses to Kitty’s dead body that he has become a monster, the very thing he has all his life most hated. He laments his exile from his homeland, the death of his family, and how the need for revenge has burned in him since that day, in a way that Shakespeare’s Prospero eventually outgrew through a desire for reconciliation, happiness, and peace.

I remember my own childhood – the gas chambers at Auschwitz, the guards joking as they herded my family to their death. As our lives were nothing to them, so human lives became nothing to me. … I believed so much in my own destiny, in my own personal vision, that I was prepared to pay any price, make any sacrifice to achieve it. But I forgot the innocents who would suffer in the process. … In my zeal to remake the world, I have become much like those I have always hated and despised.

This is, perhaps, Prospero as he might have been: not a man released by the forgiving heart of an audience after three hours of play, but instead a man whose “ending is despair,” bound by the conventions of his genre and the expectations of audience. Magneto cannot be freed because then the X-Men would lose their antagonist and the story would end. Periodically over the years writers have experimented with making Magneto turn himself in, be tried for his crimes, even join the X-Men or occasionally die; such moves are always ephemeral and temporary. Comics must be printed, writers and artists must be employed, t-shirts and video games must be sold, Hollywood blockbusters must be produced, millions of dollars must be made, and so the audience, while they may applaud, grant not freedom but further imprisonment, an endlessly extended sentence.
“We are such things,” Prospero assures us, “as dreams are made on,” and Magneto agrees, at one point assuring Cyclops and Captain Forrester that, “I am tired of seeing things as they are and asking why, of dreaming of things that never were and asking why not. I have the power to make my dreams reality. And that I shall do.” It is, fittingly, Storm herself who interrupts Magneto’s speech; when she sees his honest repentance, she proves herself a better man than Hamlet and extends forgiveness of her own. “The dream was good. Is good,” she clarifies, in a way that speaks to the whole of Claremont’s Tempest as much as to Magneto’s goal. “Only the dreamer has become corrupted.” In Uncanny X-Men, Chris Claremont presents a vision of The Tempest in which the dream of Prospero’s peaceful reconciliation between two long standing enemies has been corrupted by the antagonistic role which Magneto is forced to play within the confines of his rival’s monthly serial. He can see the evil in his actions, but he cannot change. “It is too late to change, Ororo. I am too old. I have lived too long with my hatred.” Prospero’s dream has become Magneto’s nightmare, a hellish life in which he knows he is a morally bankrupt and ironic doppleganger of the same Nazis whose ideas of racial purity destroyed his family. But there is no way out of this nightmare for Magneto; repentance is impossible, and he will continue to be the thing he is until, one day, his tortured life is at last rounded by a sleep.
Posted by Jason Tondro at 5:09 PM