Cut Till it Hurts 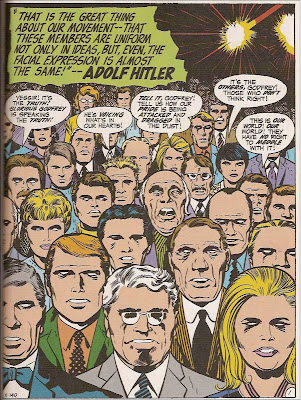 I'm in the process of revising Superhero Comics and the Literature of the Middle Ages and Renaissance with an eye towards removing images I can live without. This will make my editor happy, which is a good thing, and might make it easier to get permissions, which is also a good thing. What's tough about this is that comics are about text and image, and my natural instinct whenever I am talking about a page is to show it to you, so I can just point and say, "See? See!" I wrote the Shakespeare/ Moore/ Claremont/ David chapter with knowledge of my image requirements in mind, and used far fewer than I otherwise would have, but when I was writing for my dissertation committee I didn't see any reason to hold back. Now I pay for that by making painful cuts. Every one of them makes the end result a less perfect book, but you just do what you can and hold your nose.
But as I am working my way through the manuscript, I came across Jack Kirby's scathing commentary on the modern evangelical movement. Kirby understood first that there is a dark side to every one of us. Remember that great scene in Raiders of the Lost Ark when Indy, the quintessential "beer hero", is getting himself plastered in the wake of Marion Ravenwood's death, and Belloq, the "champagne villain", confronts him?

It would take only a nudge to make you like me. To push you out of the light.

To which, of course, Indy growls, "Now you're gettin' nasty." Because he knows that Belloq is right. And Kirby knew that too. That's why, when Glorious Godfrey appears in the pages of The Forever People, he's soon got average Americans just like you and me eating out of his hand, their eyes blanked out like Little Orphan Annie as they recite slogans of hate.
But Kirby also understood that if people are sometimes weak and afraid, and they are prone to give in to their own worst side, they slide down that slippery slope much faster when someone is pushing them. It's not the ordinary folk who make up these groups who are ultimately to blame, it's the knowing puppeteers who are pulling their strings and getting rich and powerful in the process. To watch Glen Beck on television is to watch a painful clown act; when he wants to look like a don for his self-created and self-titled Glen Beck University, he puts on his glasses and adopts his best professorial tone. When he wants to convince his audience of his sincerity, he cries and fills his voice with the earnest pleading of a man who is just concerned for his country. And when he wants to plant the seeds of doubt, he accuses the President of being a "Liberation Theologian" and not a Christian because, let's face it, the vast majority of the American population doesn't know what the hell Liberation Theology is. If they did, they might realize that this would make the President a Christian who reads the Gospel and believes that when Jesus said poor people were more likely to get into Heaven, he might not have been, you know, pulling that shit out of his ass.
It was while looking through these pages that I realized that Kirby had prophesied Mr. Beck in the person of Glorious Godfrey. No modern evangelical figure has captured the popular imagination in quite the way Beck has. He can take his hats on and off with amazing alacrity, insisting we need to return America to its values without ever naming what any of those values are. (Because if he did, it would be clear he means Republican values, and he could no longer claim his project was "not political".) He can call on the country to return to God, as if the United States wasn't already the most religious Western nation in the world. As if a President who didn't go to church could be elected in this country. As if ordinary people who go to church are somehow persecuted or terrorized. (Because, when he says the country needs to return to God, he can in this way imply that the President and the country are Godless.) He can insist that his activities are not political, then go on Fox News -- which breezily donated one million dollars to elect Republican governors, putting the money where it's mouth has long been.
I'm pretty astounded by someone who can lie to that many people, lie right to their faces, and get them to applaud while he's picking their pockets, while he's sending round the collection plate. It's not as if he hasn't been caught; there are dozens of reliable investigations into Mr. Beck's various scams and long cons. But the people he's talking to, they want to believe him. He's pushed them "out of the light." No amount of evidence shown to them will convince them that they are at the mercy of a hate-monger, a man who wants them to be afraid because it is only when they live their lives in fear that he can continue to steal from them and ride a tidal wave of populist anger all the way to ... well ... wherever it is that evangelical masters go. A sex scandal, I suppose, though none of that would ever kick Mr. Beck out of the super-rich plutocracy to which he has managed to ingratiate himself, walking on the backs of folks who ought to know better, but who have fallen for the patter -- for a painfully transparent salesman routine. In so doing, they turn their anger and fear towards an "other" whose only crime is that they aren't like us, and so they're easy to pick on, and when we pick on them, we have a vent for all our pent-up frustration and disappointment over a world that's just too damn complicated for comfort.
Posted by Jason Tondro at 9:19 PM